There are many people out there who love and care for their dogs and it’s important to focus on that when you hear gruesome animal cruelty stories.

Man is not always kind to his best friend and it’s so tragic that animal abuse and neglect continues around the world.

This is a particularly upsetting case of animal cruelty but the dog’s response is so moving it brought tears to my eyes. When you see a picture of this sweet animal and his beautiful eyes, it’s so hard to understand why anyone would want to hurt him in such a vicious way.

Warning: this story contains images you may find upsetting.

Kaylee Doonkeen and her husband found this sweet puppy crying in their yard the day before Thanksgiving. When they went outside to investigate they saw what was calling for their help and was horrified.

A pup no more than 3 months old was in their back yard and on closer inspection the couple noticed something unusual about his ears.

Someone had cut this dog’s ears off right to the scalp. He was rushed to Oklahoma City Animal Shelter where he was treated immediately.

“It looks like they were torturing this dog,” Kaylee Doonkeen said, according to Oklahoma News 4.

Vets were shocked at the dog, who they named Rocky, and said they’d never seen anything like it before.

Fortunately, when the vet checked him, he said that Rocky would be okay and that his hearing would remain intact.

“We’ve had some cruelty cases where the dog had a bad cropping of their ears but, in this case, someone intentionally removed the entire ear, and we typically don’t see something like that,” Animal Welfare Superintendent Jon Gary told KEPR TV .

Despite his terrible experience, Rocky immediately showed what a kind, cheeky and trustworthy dog he was. He was not afraid of the people who wanted to help him.

“He will never get his ears back. But eventually the fur will grow over it and his hearing will not be affected, “said Jon Gary.

He said it would be difficult to find those responsible but they appealed for information and stressed the importance of catching them.

“There’s definitely a link between animal cruelty, and domestic violence and domestic abuse,” he added. “And, so, this is a bigger picture than people realize, and it’s really important that we do our jobs to try and determine who may have done this.”

PETA is offering a $5,000 reward for information leading to the arrest and conviction on cruelty to animals charges of the person or persons responsible.

At the same time, Rocky looks forward to a new chapter in his life. 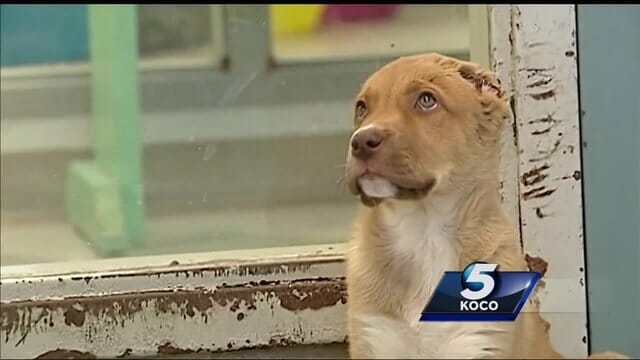 The staff at Oklahoma City Animal Welfare , who took care of Rocky, had lots of public support, with many calls asking to adopt him.

Then in January he found the right loving forever family. Rocky was adopted by Jesse and April Dean and their five-year-old grandson, Tucker.

“He just needs some love. And we just thought we would give it to him,” said Dean.

It’s amazing how this poor dog is still alive and with a good temperament after being tortured like that.

I’m really hoping that his tormentors are found and suffer the consequences of their actions.  Please share if you agree!