Stories of animal abuse cut right to the heart but I’m so thankful that the majority of people just want to see animals in a loving home.

The story of Justice the dog is particularly upsetting. He was found in a horribly abused state wandering a rural road in Indiana in November by a good samaritan.

Animal rescuers were so shocked by his injuries that a reward of $10,000 is being offered to help catch the person responsible.

An unnamed good samaritan found the tortured animal and contacted the Shelbyville/Shelby County Animal Shelter staff who have since named the dog Justice.

Staff posted on their Facebook page that the male pit bull terrier is recovering after being found emaciated with its face and body covered in badly infected chemical burns and cuts. 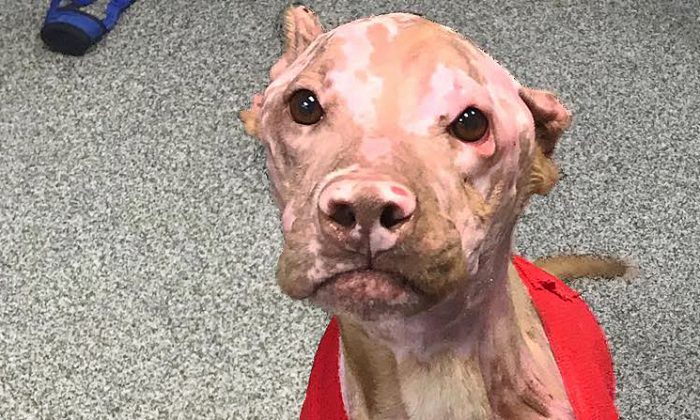 Justice had neither tags nor a microchip, leaving police and shelter staff unable to identify him.

Vets said the 2-year-old dog appeared to have been burned by some kind of chemical.

Lacerations were found on his tongue where vets believe he had tried to lick the chemicals off.

He had to be transferred to Indyvet for immediate lifesaving treatment.

Staff at the shelter caring for this sweet dog have confirmed that he is getting healthier and stronger every day.

Despite the horrors he has endured his gentle soul remains intact and his tail never stops wagging! “Justice is definitely an affectionate dog that appreciates his foster parents and caregivers at IndyVet,” staff posted on Facebook.

He will need more eye surgery in the future but is definitely lifted by the number of care packages being sent to him, staff said.

The shelter started its #Justice4Justice campaign to track down anyone who tortured the animal. The shelter had offered a $5,000 reward but the amount has been doubled to $10,000.

“We do not know what was done to this poor soul. We want answers,” an appeal on Facebook said. “Please, any anonymous tips …. big or small that can help us locate the person(s) responsible and pursue charges.”

The shelter is also asking for donations to help fund the cost of saving Justice and can contact the shelter if they can help.

The video below shows more of this horrific story. WARNING: Contains graphic images.

Please share to help these animal heroes and police find out what happened to this sweet dog and catch those responsible.