Abandoned and homeless dogs are picked up and helped all the time; thank goodness for the non-profits that work so hard to help our four-legged friends out there all alone.

But when one couple passed a dog tied to a dumpster with a note on the ground, they knew this case was different.

The 6-year-old terrier mix was found in a parking lot in South Carolina. There was a note nearby, which read: “Free Pup. My name is Scooter. Owner Went To Jail Today.”

The couple who found him took photos and posted them online in the hope of finding his home. Paula Langford, the founder of South Eastern Homeless Animals (SEHA) saw the pics and told the couple she’d take the dog in and attempt to trace the owner.

Paula went to pick the dog up and instantly got the feeling this dog was different.

“As soon as I saw him, I knew this was a loved pet,” she said.  “He was clean, he was flea-free. He was abandoned with an expensive carrying case for him, an expensive collar, a bag of grain-free dog food.”

“It was obvious that this was a snuggly, well-loved, well-cared-for dog,” she added. “He wasn’t just a throwaway.”

Dog is safe now, he is in good hands with Paula Langford founder of South Eastern Homeless Animals, if you have any questions go to their rescue page directly. Big thank you to all that helped!

After taking Scooter home and having his microchip scanned, she found that the dog was originally from Colorado. She tried to contact the number she was given for Scooter’s owner but it had been disconnected.

Paula then contacted the police officer who arrested Scooter’s owner. She learned that his owner was arrested in the Walmart parking lot and had “handed his belongings, his money, his backpack, his carrying bag and his beloved dog to his friends and asked them to ensure that the dog was safe.”

But instead his “friends” had abandoned the dog.

Paula got in touch with the mother of Scooter’s owner, and then drove 24 hours to meet her in order to hand the dog over.

“It was a very touching and emotional reunion, and it was quite obvious that Scooter was very happy to see his family again. I am 100 percent confident in my decision to reunite this beloved pup with his family,” she said. 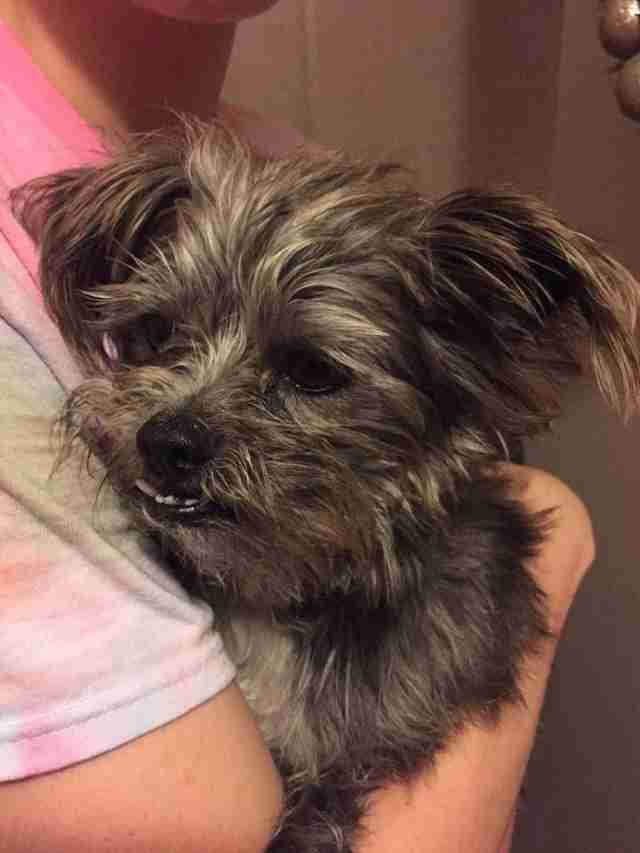 What a wonderful caring person Paula is working so hard to reunite Scooter with his owners. People like this deserve so much recognition for their selfless acts of kindness. Please share this in honor of Paula and all she is doing to help animals.