Colby Swift is a fence painter from Texas whose mother left him when he was 10-years-old. The 19-year-old is a remarkable singer who recently wowed the judges on Season 17 of “American Idol.”

Judges Katy Perry, Lionel Richie and Luke Bryan sent him through to the next round which meant for the first time in his life Colby would be traveling to Hollywood.

But while performing on stage for his second audition, country superstar Luke couldn’t help noticing something other than Colby’s singing.

The 19-year-old from Midfield, Texas, said he’s never sang in front of a big audience before, never had a singing lesson and never been to Hollywood. 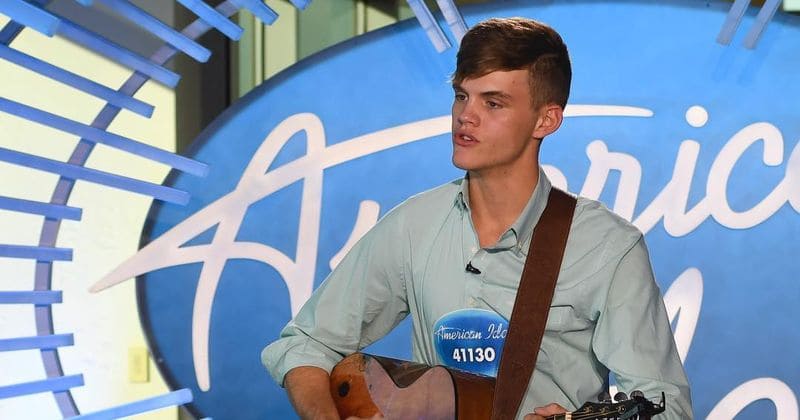 In his first audition the judges agreed that Colby was unpolished but had something that peaked their interest.

Lionel Ritchie said after his first audition, “Let me tell you what you can’t teach—that magnetism that makes people look at you and go, ‘Now, who the heck is that?’ You’ve got something that makes us pay attention to you.”

For his second audition in tinsel town Colby sang “Every Teardrop Falls” by Freddy Fender which he dedicated to his sister and even performed it a capella and in Spanish!

The judges were blown away but Luke Bryan felt a special kinship toward the young cowboy remarking,  “Well, I don’t know if a kid has ever walked in here and been more me at 19.”

When the contestants were called back to find out if they’d got through Luke asked Colby to show the audience and viewers at home the bottom of his cowboy boots.

He had holes in both of them.

“What size shoe are you, Colby?” Luke asked as he removes the boots off his own feet.

Watch the emotional moment when all round good guy Luke gives Colby his own cowboy boots.

Please share this story if you too were moved by Luke’s kind gesture. What a nice guy and well deserved Colby. We hope this talented country singer gets the success he deserves.