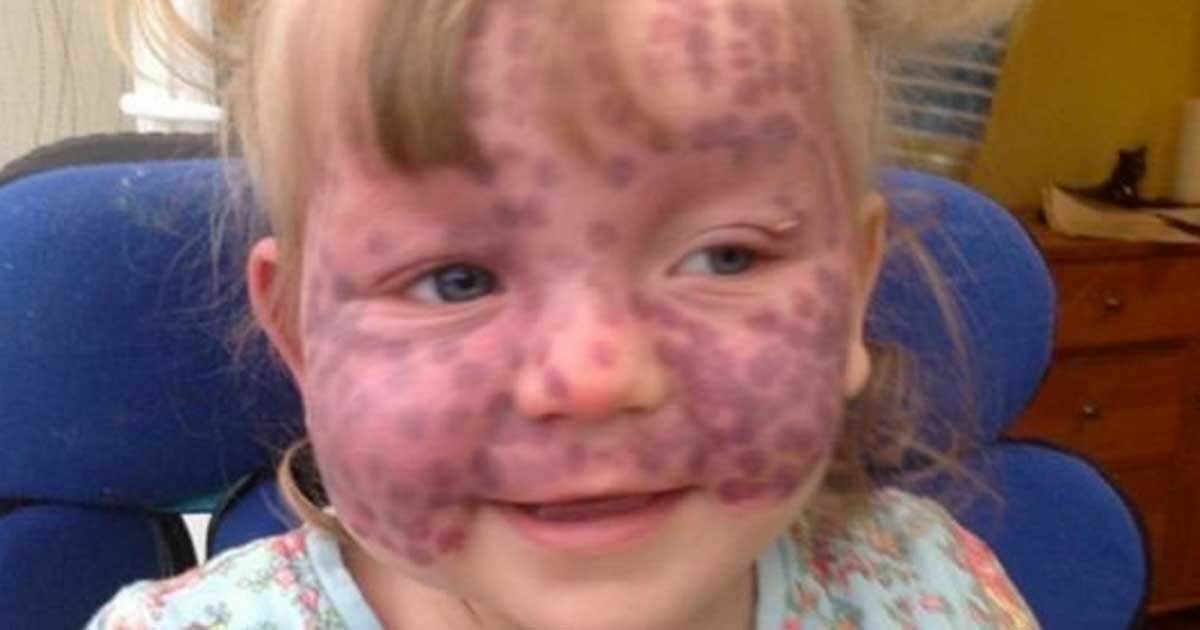 Rebecca Callaghan’s pregnancy back in 2012 was a difficult on, and due to excess fluid around the fetus, the doctors decided to induce labor early.

Nobody had a clue that there was something wrong with little Matilda until about half an hour after she was born.

When she came into the world, she had a big blue mark on her face that stretched down one side of the body. At first doctors thought it was just a bruise – then they realized their huge mistake.

Just 30 minutes later, the doctors told the parents that it was a birthmark.

Matilda quickly became so ill that she was taken to the Adler Hey Children’s Hospital in Liverpool, England.

In just a few days, the parents’ happiness had turned into extreme concern. They didn’t know if they would see their daughter alive again.

“We couldn’t travel with her as she was so ill. As we stood watching her being taken away, we didn’t know if we were going to see her again. We’d been so excited at our baby’s arrival, now within a matter of hours we didn’t know whether we would even see her alive again,” her father told Daily Mail.

On top of everything else, they learned that Matilda had two holes in her heart.

But she was a real little fighter, and although there was a high chance that she wouldn’t survive, she managed to make it through surgery.

Matilda also began laser treatment to remove her unusual birthmark. But it could take up to 16 years before it’s gone completely.

“She has treatment every couple of months, and the laser does make it look more red and angry, and her face is covered with blobs afterwards, which then gradually fade away again,” Matilda’s dad Paul told The Daily Mail in 2016, and continued:

“People think we are bad parents – that we have somehow caused Matilda to look like she does.”

But there were many people who stared at Matilda and her birth mark. People even asked Paul and Rebecca if they left their daughter too close to a radiator and let her get burned.

Paul, Matilda’s father, has said the following: “They just see what is in front of them and jump to hurtful conclusions. I wish they could see past the birthmark and see what a wonderful little angel she is.”

Besides the birth mark on her face, the disease has also caused Matilda to become almost blind.

She also can’t walk, but thanks to a special walking frame, she’s been able to take a few steps herself.

Matilda’s whole life has been a fight, but despite that she has a smile for everyone she meets. Her dad says she’s a headstrong little girl: It’s either her way or no way at all!

Every day, the family has to put up with stares, insults and even outright mockery.

“Despite everything she has been through, she has a smile for everyone. She’s doing fantastically well,” her father said.

“We are unbelievably proud of Matilda, she is just amazing–we just live every day as a bonus.”

Today, Matilda is 8 years old. In June 2019, the family posted what appears to be a recent photo of the girl in her wheelchair.

The crowdfunding page was seeking to raise $6,300 to help raise money for a new wheelchair.

”We are fundraising to provide her with new chair so that she may continue to do the thing she loves the most, spending time outside and away from riads snd crowds,” the page states.

According to the page, the child’s grandfather recently passed away.

Please help us SHARE Matilda’s story so that more people can help the brave little girl to get the new wheelchair she needs to continue living her life in the best way possible!