Seeing people reach their goals in spite of obstacles is always incredibly inspiring.

No matter what their goal is, I believe everyone can benefit from a good role model – and mom Ashley Dunn Bratcher is certainly a role model!

Ashley had been morbidly obese for most of her life. She began comfort eating huge portions of food and candy when she was only 6 years old.

When a doctor gave her the shocking news that she would most likely not live past 30, it was a huge wake up call for the mom.

It was then that Ashley decided to fight her food addiction, if not for herself then for her 5 year old son!

Ashley Dunn Bratcher comes from Texas and weighed 700 lbs when she appeared in the show ‘My 600 lb Life’.

She had just turned 27, but her weight made it next to impossible for her to move.

“The normal things that everybody does are just impossible for me to do because of my size,” Ashley told TLC.

The only thing she could still do by herself was shower, but even that was a battle, since she could only stand up for five minutes.

“Not a day goes by when I’m not in pain. Sometimes I’m scared of breaking my own back,” Ashley said at the time.

Ashley was already overweight when she was 6 years old. In seventh grade she weighed 250 lbs. When she graduated high school her weight had risen to 400 lbs.

Despite battling her weight, Ashley found love in high school. She and her husband John met when they were  young and together they have son Patrick.

Unfortunately, Patrick has become Ashley’s personal helper at home due to her weight – which is hardly something a 5-year-old should have to be.

”He’s my legs, he helps me with just about everything. Without him, I’d be lost,” Ashley explained before joining the show in 2016.

But things would soon turn around for Ashley.

She came into contact with Younan Nowzaradan, who specialises in operating on people who are morbidly obese.

He warned Ashley that she wouldn’t live to see her 30 th birthday if she continued with her unhealthy habits and her manic eating. For her son’s sake, Ashley decided to fight her eating disorder.

But it was hardly going to be a walk in the park. During her weight loss journey, Ashley has had some breakdowns.

Four months after her gastric bypass surgery, she was taken to hospital with a stomach ulcer after abusing painkillers.

Doctor Younan Nowzaradan suggested that Ashley meet with a therapist who could help her handle her emotional trauma.

Happily, her determination has now paid off.

Under the course of a year, Ashley has dropped down to 250 lbs!

Today Ashley has learnt how to control her addiction and no longer uses food to fill an emotional hole.

If she feels angry, sad or happy she goes for a walk instead of eating.

“Surgery is just a tool. It does not change your mindset,” Ashley says. 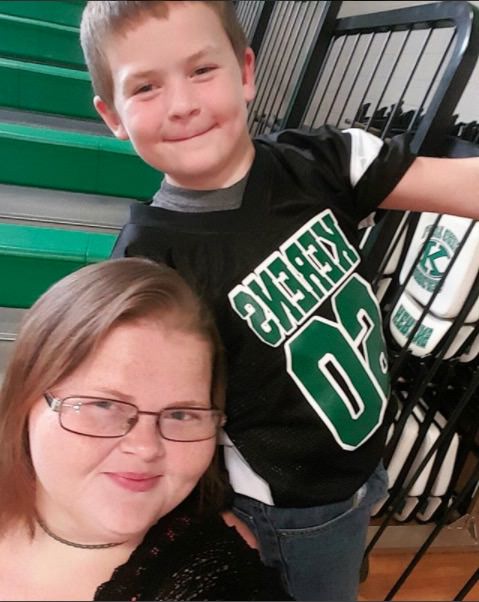 She now eats healthy meals in small portions and the pounds are continuing to come off.

Think how strong Ashley had to be in order to take control of her illness and turn it into something positive. Thanks to professional help and strong support at home, Ashley has a new outlook on life.

Share Ashley’s inspiring journey so that all your friends get to hear her brave story!

Hopefully this can motivate even more people to change their lives for the better!