We often hear about natural remedies that offer an alternative to medicinal remedies or expensive drugs that can be harsh on your body in the long run.

If these remedies work they are the perfect alternative and I’m all for trying it. This is why I had to share the latest health hack of putting a bar of soap under your fitted bed sheet for a common health issue that may affect one in 10 people in the U.S. It may sound slightly strange but many people swear by it.

This has been hailed as something that works for many sufferers of restless leg syndrome (RLS), the disorder of part of the nervous system that controls the urge to move our legs. It causes uncomfortable sensations in your legs which usually affect people’s sleep.

It can be a sign of an underlying disease such as parkinson’s disease, kidney failure and diabetes which often include symptoms of RLS and treating these conditions can give some relief from RLS. Some medications can also worsen symptoms and even during pregnancy some women can develop RLS symptoms.

Dr. Oz covered the natural remedy on his show suggesting that soap with essential oils was the best choice especially lavender soap which helps relax your body while you’re trying to sleep.

There is no medical evidence to suggest this actually works but there is a suggestion that the the symptoms of RLS could be caused by dehydration and low potassium levels. Most soap bars contain sodium chloride and during sleep it can be absorbed through the skin from the soap.

While it may sound unbelievable, but there are people who have tried it and praise its effectiveness.

“When my mother used soap to relieve pain and also leg cramps,” says one post on Steady Health.  “I thought she might be fooling herself.  Now, I have several bars in bed with me each night, placing them wherever the pain appears from feet to head.  It works for me and for my husband, and we also use any type of soap.  It does not take away the reason for the pain, but it does allow me to get to sleep when the pain interferes.  It is very much worth the try!” 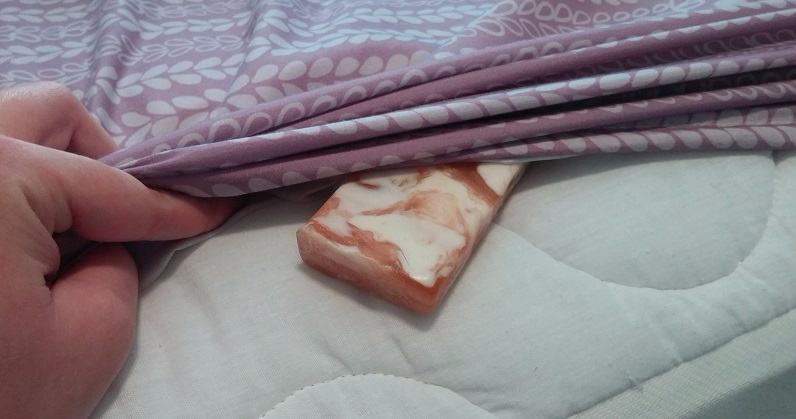