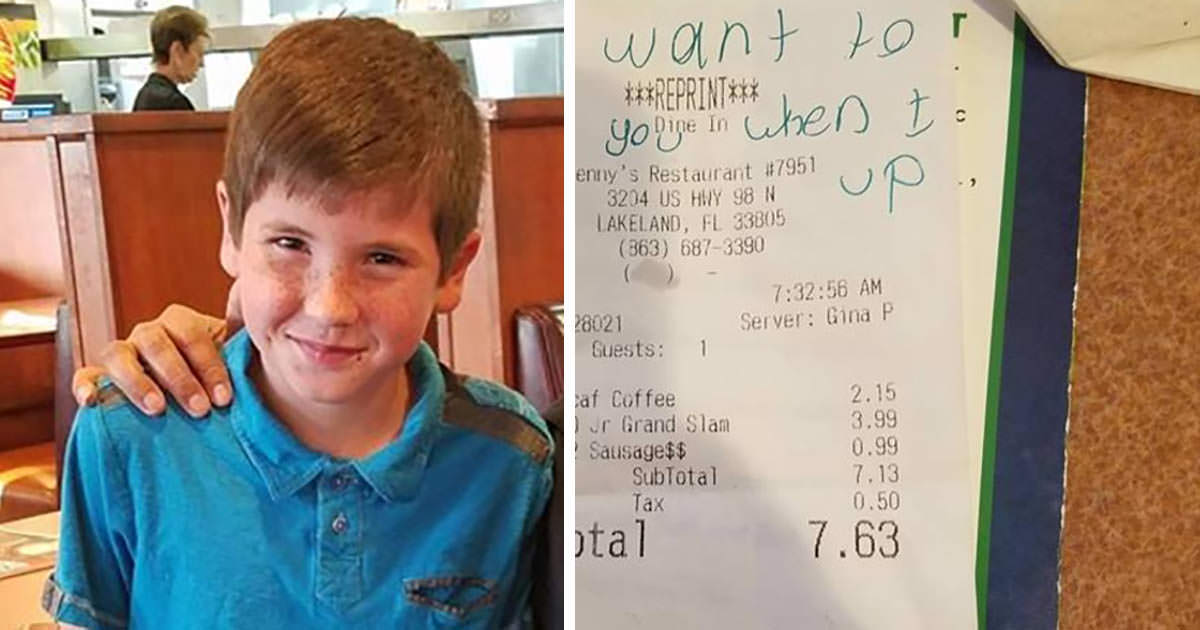 9-year-old Noah was having breakfast with his mom at Denny’s when he saw a police officer sitting on his own at a nearby table.

Noah instantly became nervous, he knew he wanted to do something but wasn’t sure what.

He told his mom that he had seen the police officer, and started hatching a plan.

Noah had a dream, he wanted to become a police officer when he grew up. He asked his mother if he could go and say hi to policeman Eddie Benitez.

Of course his mom agreed, but when Noah started to approach Eddie he became so nervous that he didn’t dare say anything. He decided to come up with a new plan, which would cause the officer to jump out of his chair a few minutes later.

Noah had saved some of his birthday money and wanted to pay for Eddie’s breakfast.

His mother Amanda waved over the waitress and told her about the plan. After they paid Eddie’s bill, Noah wrote down a message on the receipt.

Then Noah picked up the receipt and went over to the policeman.

Eddie saw the boy coming towards him and was confused about why Noah had his receipt, but it didn’t take long before he understood. After reading what the young boy had written he jumped out of his seat and took a photo with his new fan.

Noah’s note on the receipt read:

”I want to be you when I grow up. Thank you for your service, Noah.”

Eddie was so moved by the gesture that he still carries the note that Noah wrote him every day.

Eddie told the story to 10 News:

“It meant everything. It meant that I’m supposed to wake up every morning and put on his uniform and go out there and do what I do. You know? It means that I need to keep trying to be a good example to all these young guys.”

The Lakeland Police Department where Eddie works thought the story was so heart-warming that they shared the photo of Noah and Eddie on their Facebook page.

Noah was so proud of the reaction that his nice gesture received that he now wants to be a police officer more than ever.

Don’t hesitate to click that “Like” button if you also think this was a sweet way to honour our police force!