When Steven Hildreth Jr was stopped by a police officer in Tucson, Arizona, he was told it was because he had a broken headlight.

The officer had questions and Steven was completely honest when the officer asked him if he had any weapons.

He told him he had a gun and had a permit for carrying one.

Steven shared his experience with the officer on Facebook and it immediately went viral.

Although this incident happened a while ago, it has been shared by almost 400,000 people and has attracted over 800,000 comments.

The Tucson police officer asked for Steven’s license and registration. As he had them in his back pocket, the officer had to disarm him so that he could reach his wallet.

“The officer explains for his safety and mine, he needs to disarm me for the stop. I understand, and I unlock the vehicle,” he writes in his Facebook post.

“I explain that I’m running a 7TS ALS holster but from the angle, the second officer can’t unholster it. Lead officer asks me to step out, and I do so slowly. Officer relieves me of my Glock and compliments the X300U I’m running on it. He also sees my military ID and I tell him I’m with the National Guard,” Steven adds.

So, I'm driving to my office to turn in my weekly paperwork. A headlight is out. I see a Tucson Police Department squad…

The officer points out that Steven’s registration card is out of date so goes back to his police car to check his details. He finds out that Steven is all up to date on file.

Steven starts to worry, figuring that the officer has him on at least two infractions and wonders how he’s going to pay them.

Then the officers return with his gun and says: “Because you were cool with us and didn’t give us grief, I’m just going to leave it at a verbal warning. Get that headlight fixed as soon as possible,” according to Steven.

‘I shouldn’t be alive right now’

He writes: I’m a black man wearing a hoodie and strapped. According to certain social movements, I shouldn’t be alive right now because the police are allegedly out to kill minorities.

“Maybe if you treat police officers with respect, they will do the same to you. Police officers are people, too. By far and large, most are good people and they’re not out to get you. 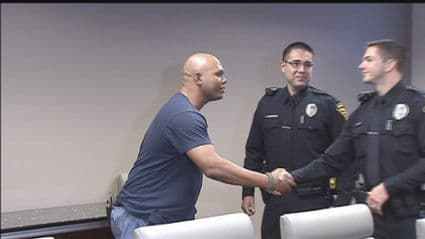 This story helps us to think differently about the way officers treat certain groups of people. It’s important that we hear more of these stories so we have both sides and we can come to our own conclusions.

There are bad apples in every profession and such people should be held accountable for their actions.

But the majority of officers just want to protect us and risk their own lives in doing so.

We should always treat people the same way we would want to be treated. Please share this story if you want to honor police officers and Steven for sharing his story.